Marked to Die: medieval mystery with hints of Richard Armitage

Posted on September 5, 2017 by trudystattle | 4 Comments
Third in a series of medieval murder mysteries, Marked to Die has just been released by historical fiction author Sarah Hawkswood. Sarah’s writing is superb. The historical details she weaves into her narrative sweep the reader into the atmosphere of the era from the very first page.

Sarah shares with us how words transport us into realms of imagination, and how a certain British actor with a sultry voice inspires her writing:
Computer. Keyboard. Action.

Fiction writing is words, but it is about images and emotions. When we read we are looking at typeface or a pen’s strokes, but we are ‘seeing’ the images those words create in our minds, feeling the emotions they initiate. Factual writing informs, moulds ideas, gives frameworks of knowledge, but fiction is about imagination. Our brains are stimulated not by the letters S U N S ET but an image of a sunset that the letters spark; the word on the page frees us from time, space, the limitations of our own abilities, and I think it can give our minds as good a ‘workout’ as a challenging sodoku or crossword puzzle. When we learn to read, the magical point is when the mind is not applying itself to the task of spelling out the letters into a word, but when it does that automatically and is freed to gambol in the wide fields of imagination.

So a novel takes one away from that cramped seat on the train with the stranger next to you jiggling slightly as they listen to the music in their earphones; the wet winter’s afternoon with a pile of ironing still to do; the snoring spouse; the everyday and humdrum. It should take you away as you read it, and it takes me away as I write. Writing as a profession, even when giving up ‘the day job’ would be impossible, has its stresses. There are days when each word emerges reluctantly, deadlines that run towards one like a charging rhino, but it is also, to me, as much escapism as reading.

When I write, I see, I feel, I hear, I taste and smell. I am there, in a world bounded only by imagination, given structure by history, given motion by plot and character. I see every scene as though through a film lens, with the ability to view the rushes immediately, move the scenery, set the actors new marks, change their lines without them throwing a hissy fit, and tweak it until it feels natural, yet crafted and as close to perfection as possible.The only difference to film is there is no Hans Zimmer or Howard Shore adding a score to it.

In this way of writing, casting is important. It does not mean that everyone in my books is based upon a particular person, actor or otherwise. Many are broad brushstrokes, ‘a small, motherly woman with deep crow’s feet at the corners of laughing grey eyes’ is casting, even if there is no name. However, real people can be a huge help, especially with major characters, even if it is one aspect of a person, a mannerism or tone of voice. Having a specific person also gives continuity, though after a while their presence is second nature. It also avoids the danger that if a character is made up of elements from too many people the author is creating not something natural but a Frankenstein’s monster. The mix may be infelicitous, show all the suture lines and fall apart before the denouement. By the same token, sticking rigidly to every aspect of one person is just teleporting a clone into your story. A muse is, I feel, a dangerous thing, a limitation.

At which point, as an author who has also been a member of the C19 Forum, I hold up my hand and admit that ‘casting’ a certain Mr Armitage, to various degrees, has been a joy. He is wonderful to work with because of the quality of his acting, the way he subsumes whoever he really is into the character he is becoming; he also has little mannerism that are easy to give as tell tales to a character, so that in a given situation the character will do a certain move of the hand, lift of the brow. 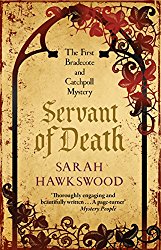 The Bradecote and Catchpoll 12th century murder mysteries are into their third book on shelves, and I am ahead of the game and writing number nine in the series. I long ago reached the point where I do not have to think how any of the detecting trio will react in a scene because I know them so well. It makes writing interchanges and situations very easy and natural, and though the plot and the dialogue thread, are down to The Words, the story in my head, how they appear on paper is hugely influenced by me ‘watching them’ as I write, letting their voices guide the phrases, the nuances. Hugh Bradecote has been about 85% Mr Armitage since the first revision of the very first book, Servant of Death (though it first saw print as The Lord Bishop’s Clerk). I have been writing Bradecote, Catchpoll, and the third member of their triumvirate, Serjeanting Apprentice Walkelin, for over a decade and they are ‘my boys’. Do I consciously think ‘ah another few hours watching Richard Armitage’ when I settle to write? No, I do not, because it is just the way it is, habitual, normal. Besides, I did not see Mr Armitage when I was privileged to see The Crucible at The Old Vic in London; I only saw John Proctor. The gentleman might not appreciate being kidnapped for my purposes, even 85% of him, but he would appreciate that I am not watching R. C. Armitage but Hugh Bradecote, one subsumed into another.

Of course the reader need not know my casting, may cast for themselves, interpret characters slightly differently, because the writing has evoked different images, but if you are told, and you like watching a certain actor . . .

I account myself a very lucky woman. I have The Words (even if occasionally the wrong Words crowd my head and I have to stop what I am writing and set down fifteen thousand for a short story that will never be read except on my computer), and I have a strong imagination. The icing on the cake is that in my ‘world’ I have been able to watch a certain long stride and mobile brows, hear a certain baritone voice, for hundreds of hours not in the canon of his work, and running through what is thus far, over three quarters of a million words. Feel free to join me.

Marked to Die, the third of Sarah Hawkswood’s Bradecote and Catchpoll novels, is out in hardback (US 2 November 2017) and ebook, published by Allison & Busby.

For more information on Sarah Hawkswood and her work visit her website at: bradecoteandcatchpoll.com

This entry was posted in New Release. Bookmark the permalink.

4 responses to “Marked to Die: medieval mystery with hints of Richard Armitage”