Kate Forrester holds the distinguished title of fan fiction queen in the Richard Armitage fandom. She has written fan fiction based upon more of Richard’s characters than anyone else we know of. She’s written stories based on Lucas North, Guy, Harry Kennedy, John Porter, John Thornton, and John Standring and a few others. (We interviewed her at The Armitage Authors Network two years ago: here. )

Today she tells us a little about her relationship with fan fiction and how it helped her move into writing her own original stories:

It’s strange, I always thought that my writing fan fiction began when I joined C19 back in 2008 – yes, that long ago. However, in writing this, I was reminded that my first piece of fan fiction was written at school for English composition – a Sherlock Holmes story about a jewel thief. I think the reason I forgot about this little story is that life interceded. I became a nurse, a wife, and a mother — and more than thirty years would pass before I returned to creative writing.

I often ponder what might have happened if a certain tall dark handsome cotton mill owner had not passed through my life. You see, I wouldn’t have joined C19. That wonderful place led me to become aware of a genre of writing called fan fiction. I was a reader first, but all too soon I was taking my first tentative steps in writing one. Mr Thornton, how much I owe you!

It is odd to acknowledge my debt of gratitude to this literary character or at least his television incarnation, because he was the character I had the most trouble writing about. Unlike so many writers in the Richard Armitage (RA) fandom, I couldn’t and didn’t start with a North and South fan fiction. John and Margaret were too perfectly drawn by Mrs Gaskell. What did I have to say that was new about them? For a long time, the answer to that question was nothing. Instead, I followed an old adage and wrote about what I knew – medicine. Luckily for me The Golden Hour was shown about the time I entered the fandom and it was easy to write something based on a different ending to the hostage story.

Much to my utter surprise people enjoyed ‘A New Track’. Having written about one of Mr Armitage’s characters I found myself writing about another and then another. I became the RA fan who would write about most of his characters — that is, until he played Thorin. It seemed I had a new hobby and that is what fan fiction was for me — a hobby.

I get so frustrated when I read articles ridiculing and belittling fan fiction. Have the people out there sneering even read any fan fiction? There is a belief, wrongly held, if my experience is anything to go by, that if fan fiction isn’t written by obsessed teenagers, it must be written by middle-aged oddballs or sex starved housewives. Yet, the people I know who are writing fan fiction are normal folk with homes, jobs, and families. Yes, there is badly written fan fiction out there, I’ve even written some, but there is also some terrible original fiction out there as well. It could be and is argued that a lot of Shakespeare’s work is fan fiction, a retelling of old folk stories or history to suit his own purpose. Steven Moffat reimagines Conan Doyle’s Sherlock to huge critical acclaim while I reimagine Gaskell’s North and South as A Nightingale Sings and am nothing more than a fan fiction writer. The only difference is audience size and money.

This tale takes John and Margaret’s story into WW II

I don’t think creating fan fiction made me a writer. Somewhere inside of me a writer always existed. Rather, fan fiction facilitated my development as an author. It helped me develop the confidence not only to write a story but to allow that story to be read because that, for me, is the difference between being a writer and an author – allowing others to read and comment on what I have written.

WhileI was writing my John Porter fiction Absolution, I realized the time had come to write an original novel. What followed was Degrees of Silence.  This was the novel I had to write – it was so personal that at times it hurt me to commit the words to paper (well, the computer screen, but you know what I mean). I think because it is so personal it struck a chord with my readers, maybe they know that the two adult characters are, in a way, both me.

Kate’s first original novel is her most personal work

It occurred to me that my other original fiction could be thought of as fan fiction as well because it is based on a dancing show like Strictly Come Dancing or Dancing with the Stars. I think that The Best Things Happen While You’re Dancing is the most commercial thing I have written and the most romantic. It is an example of that other much maligned genre: chick lit. Maligned that is by men, who manage to say ‘chic lit’ in a slightly insulting sort of way. Why is it, I wonder, that Boy’s Own adventures are not nearly as maligned. 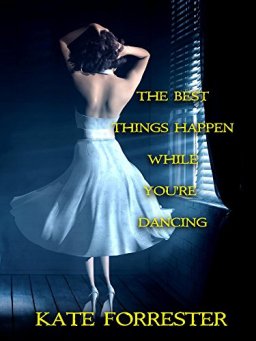 People do wonder why I no longer write fan fiction and I guess the honest answer is that it has served its purpose. I have, to a certain extent, moved on. But I have only written fan fiction based on RA’s characters, and now I cannot watch the shows he is filming. So, you never know … if he re-emerges on British television in a show I love, I may go back down the fan fiction road.

This entry was posted in Guest Post, Uncategorized and tagged Fan fiction, Kate Forrester, North and South. Bookmark the permalink.

5 responses to “Fan fiction – a journey into original creative writing”