The Armitage Authors Network is pleased to have Georgia Hill back on the site with us. Georgia shared with us some of the impact of Richard Armitage’s first entrance into the world as John Thornton in our post about the BBC mini-series’ tenth anniversary here.

Armitage Authors Network: You’ve been a fan of Richard’s for quite a long time. Tell us a little about how you discovered Mr. Armitage.

Georgia Hill: Like many fans, I discovered Richard Armitage when he played John Thornton in North and South. I have to admit to hating the character in the first episode but, by the end of the second, I was in love! I caught the last two episodes on a drama channel recently and it hasn’t lost any of its impact. I loved the book and adored the miniseries.

AAN: Did you write fan fiction for the Armitage fandom? And was it your first attempt at writing fiction?

GH: I didn’t exactly write fan fiction but found I was basing male characters on John Thornton and their physical characteristics were definitely inspired by Richard! Also, I found little details from the television series found their way into whatever I was writing. In In a Class of His Own, Nicky Hathaway has a bouquet given to her and they’re yellow roses of course!

AAN: Oh, I read In a Class of His Own and remember some of the North and South similarities I recognized in the story!

If you didn’t write fan fiction, what impelled you to begin writing?

GH:  I had two characters who refused to leave my head. I had to write them down. They became Perdita and the gorgeous Nick Wainwright in Pursued by Love, my first book. I began posting chapters on the website C19 and things have evolved from there. It’s been amazing.

AAN: C19 has helped nurture a flock of budding writers over the past decade. For many of these authors, John Thornton or North and South was a big influence.

GH:  North and South has definitely had a big influence on my writing.

AAN:  When did you publish your first book?

GH:  My first book was Pursued by Love. It came out in 2009 and is about a troubled actor making a new television version of Pride and Prejudice. Jane Austen is another huge influence!

AAN:  I know you’ve just released a new book. What is it about?

GH:  I’m so excited about this! While I Was Waiting is my first historical novel. It was just released July 2nd. Rachel moves to a rundown cottage in the country and finds a tin full of letters and diaries. They document the story of Hetty who lived and loved during World War One. Rachel gradually pieces together the details of Hetty’s life and, in doing so, learns how to love the man she’s just met. It’s tragic in parts but ultimately life-affirming. I’m very proud of it. (And, by the way, one of the characters is called Richard!) 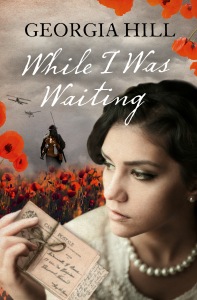 GH:  I love history and have a degree in it. One of the reasons I love living in my part of the UK is its rich history. A mile away is the remains of a major ancient Roman fort, the village I live in is mentioned in the Domesday Book and a hill not far away is rumoured to be where King Arthur slayed a giant! It’s very inspiring. For my next book, I’ve looked to the Jurassic Coast of Devon and Dorset. It’s all about family secrets and fossils – oh and a hunky boat-builder. He’s tall and dark-haired. Must be the North and South influence yet again!

Thank you so much for having me on. Happy reading!

This entry was posted in Interviews and tagged Georgia Hill, North and South. Bookmark the permalink.

One response to “Armitage Authors interview with Georgia Hill”